If you're looking to attend an esthetician school in Los Angeles, you're in the right place: the city employs over 2,200 estheticians, the second-highest number in the nation, after New York. Given that the City of Angels is famous for being the hub of the entertainment industry, it's no surprise skincare careers are thriving.

Unfortunately, living in LA has its drawbacks for skin: despite the focus on skin health, Los Angeles ranked 64th in a study of major metropolitan areas, with an astoundingly poor ranking for pollution and smoking as contributors to unhealthy skin. The city needs expert estheticians to come to the rescue! The Los Angeles area provides a mean hourly wage of $17.45 per hour, but the city's need for skincare specialists is exploding, with an expected growth of 17% between 2018 and 2028 (compared to the national average of 11%).

Wherever you decide to specialize, once you earn your license from the California Board of Barbering and Cosmetology, there are no limits to where you can take your career. Read on to learn about esthetician programs in Los Angeles. 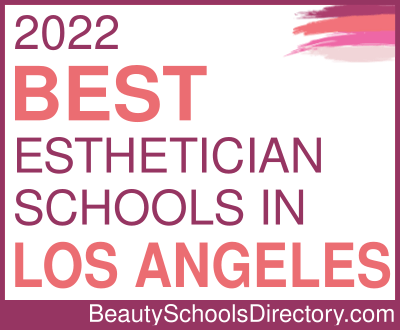 If you're looking for only the premier schools that Los Angeles has to offer, then check out our list of Los Angeles's best esthetician schools.

Academy of Esthetics and Cosmetology – Accredited

Find Other Esthetician Schools in California

Check out the Esthetics/Skin Care schools these cities in California have to offer.